We row into the most fantastic cliff formations – almost as if the previous days were just appetizers. The boatmen taming the rapids – and you can bet I was being much more careful to “stay in the boat.” The rapids surely do excite and accentuate the bliss of being on the river.

Cruising about 32 miles that day, we land at Onion Creek for a two-night layover. Put on more sunscreen, drink more water, and bask in the beauty, silence and peacefulness of the canyons.

At low water, it can be busy in this section of the river where there are plenty of places to put your boat in or pull out for a camp night.

At today’s high water, many of those campsites, or at least the place to pull the boats in, are under water.  No eddies to cruise into. And it’s much less crowded. 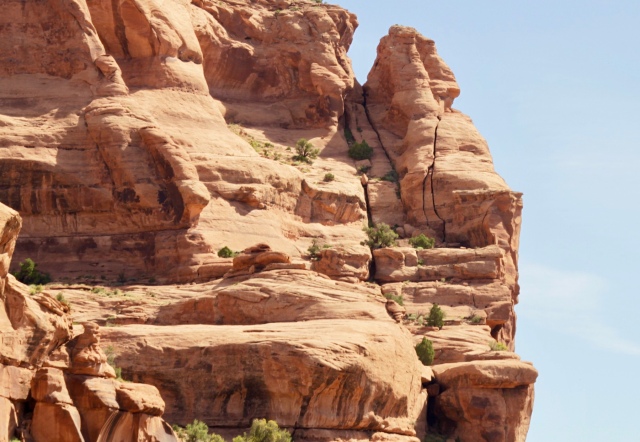 A fault line crosses the river just after we leave Big Horn camp. We see the evidence of it as the rock layers that we’ve seen sloping gradually, now make a big drop of 400 feet – about the height of a 4-story building. The Wingate Sandstone that made the huge cliffs we’d passed the last couple days was, at this point, several thousand feet underground. Talk about earth-movers. The sandstone here and elsewhere create these magnificent hills, towers and what seem to be man-made statues.

This is the day we choose to give Rhett’s motor a chance. There’s a long strip of river that takes a lot of rowing to get through. Flat water, wind against the bow. A while after leaving camp, the three boatmen, line up their boats, one to one to Rhett’s boat. 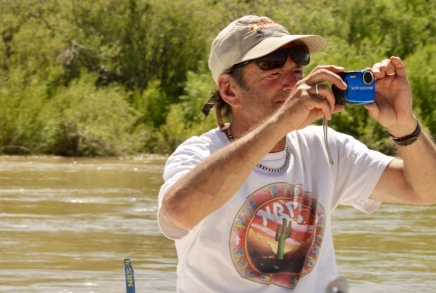 Today’s trip leads us to our first hint of civilization since we left the train tracks a couple days ago. On the south side of the river, state route 128 follows the river, snaking all the way to Moab. As the days go on, we see more and more traffic – everyone wants to get out of town! Other signs of civilization are orchards of fruit trees and farmland established in the 1900’s. 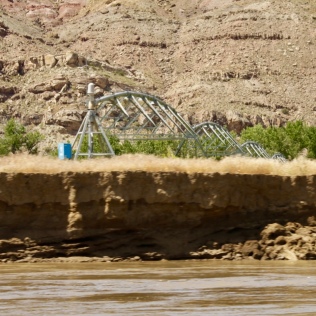 We floated past a crew from Fish and Wildlife Service, charged with protection of the river and the fish in it, who were doing a fish count. They drop an electrified metal ball into the water which shocks the nearby fish who are just there minding their own business. The fish float to the water’s surface – and voila! They’re netted and counted and released back into the mighty Colorado.

The low hills we see on the west side of the river are capped with Mancos Shale, at a mere 80-95 million years old, the youngest rocks in the Canyonlands. The hills to the east are capped with Dakota Sandstone. For the next several miles, we could see the hills sloping up thousands of feet. Remarkable. 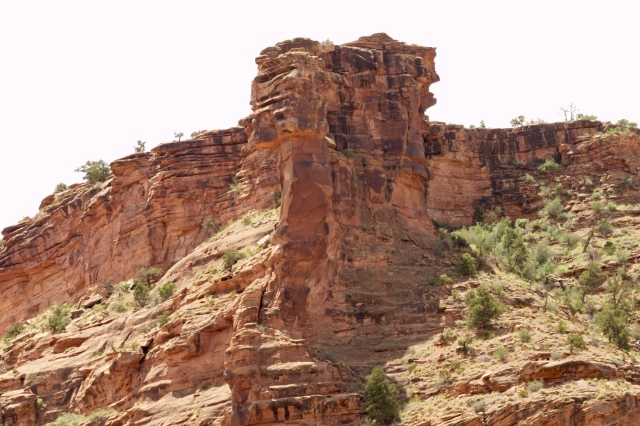 Today we passed below the Dewey Bridge, opened in 1916 after a 3-year project. During its time, it was the longest single span suspension bridge in Utah, built to take on 9,000 pounds of freight, three wagons and six horses – all at the same time! A new concrete bridge opened in 1988, putting the wooden Dewey out of business. Twenty years later, a little kid playing with matches started a brush fire which then engulfed and destroyed the Dewey Bridge timbers and a fine piece of history. 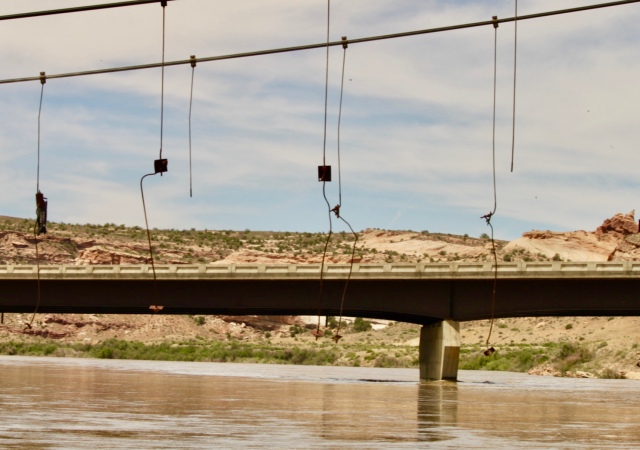 Closing in to the bridge, we checked out a line of long steel cables with pointy tips hanging from one side of the bridge to the other – and some of us wondered if Fred’s new bimini would clear the damn things. It did. Barely. Those steel cables originally held UP the Dewey Bridge! LOL

One of my fondest takeaways from the trip is that besides mastering the water, the days – and nights – are made for continued story-telling – everyone has a million of them Adventures past, friends and family, funny, hilarious and sometimes very sad stories – and  living life to its fullest every day you can. 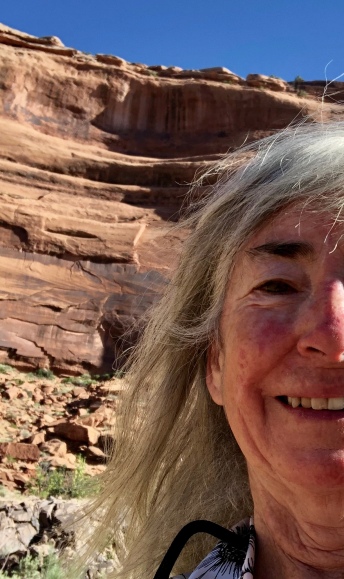 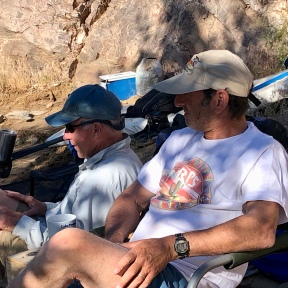 I write and I paint. I'm a photographer of life including a bit of sports photography for the local newspaper. I'm a member of the Napa Valley Writers. I hike and bike. I'm a listener and I read. I'm a proud member of https://www.couchsurfing.com. I'm lucky to have a few great friends, a large and beloved family. I enjoy my own company and manage to be happy most of the time. I love the outdoors. View more posts