Our second day on the river continued in Ruby Horsethief Canyon. Quiet water (about 9 miles an hour) interspersed with riffles, eddies and rapids leave me in awe. I’m learning from the guys how the water changes – duh – with the volume of water flowing through the channel basin. They chat about how this or another spot on the river, how it looks different, how they remember the water looking on previous trips. They know their stuff – and that puts me at ease.

We covered just about 5 river miles that first day, about an hour and a half.  First day out involved a lot of travel from home to the put-in ramp, so that made for a later start and earlier end to the first day. These rafts are packed with more than a thousand pounds of gear, including water, ice, food, clothing, camp kitchen equipment, cameras, propane tanks, the mandatory river guide map and everything else needed for a 6-day trip. Most of it comes off the boat at night, and back onto the boat in the morning. Mornings, and evenings, are on river time, and never hurried.

Day two we rafted 13 miles through Ruby Horsethief Canyon, three blissful hours, passing many potential river camps that are washed out with high water, and no eddies at the edge to easily slide into anyway.

The coolness of being on the water was wonderful; I was never chilled. My wide brim hat helped shade my face from the hot sun, tied under my chin to hang on through rapids in the water and gusts of wind.

Today I had my first look at the local big horn sheep, a little family of three. We rolled past miles of black rock formations. These really old Precambrian period rocks started out as limestone and shale, some sandstone, about 1,700 million years ago.

Later on, about 1,400 million years ago, there was a big upswelling of magma. I’m told the “black rocks” in the canyons here are a mix of schist, amphibolite, metamorphic gneiss, and intrusive granite rock. I don’t know what it means, either. Look it up! 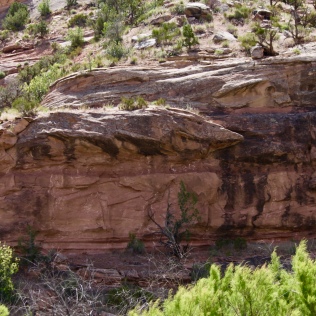 I just bought my own fascinating river guide book complete with introductory geologic & geographic lessons, history of the west and the people who populated it.

The tamarisk trees along the river’s edge are non-native and detrimental in that they can choke off the rivers. About 15 years ago, tamarisk beetles were introduced to kill those pesky trees – and you can see these dead trees all along the river. The healthy ones are quite pretty with pink flowers. Rangers periodically cut out the dead trees, and quickly pour poison in the roots before the tree closes itself up and grows two more. Cottonwood trees are abundant, their beautiful shimmering leaves catch the eye, and at this time of year, small tufts of cotton float in the air.

Our river day ended at Black Rocks 6 camp, west of Moore Canyon, a difficult pull-in at 30,000 csf and our well-trained guides made it with ease.

Camp was plenty big for two tents, mine and Luke’s, as the boat owners (Tommy, Fred and Rhett) slept atop their boats that night, and many other nights as well. But not the last night!

We had plenty of time and space in which to roam around and explore!

The wildflowers surprised the heck out of me when I zoomed in on them with the camera! So much activity… 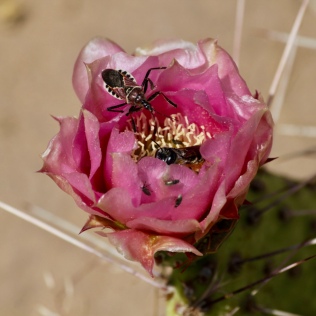 Fragrant juniper bushes with their dark purple berries grace the landscape her. The sun was feeling real good, the company was great, the food plentiful. Rhett’s turn to cook up a yummy London broil, served with two types of potato salad and a box of red wine in a plastic bag. There was an abundance of beer and tequila; we were living large.

After this last picture was taken, long into the night, I woke and crawled out of the tent to gaze at the sky. There she was, the Milky Way – I recognized her and was so excited to see her again. The millions of stars just above this little planet were all I needed to see before laying my body down. ‘Til the next night!